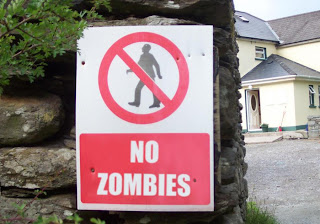 On Easter afternoon, my daughter asked, “Dad, you know what some people call this day?”

Suddenly I remembered an online poster mocking Christianity, comparing Jesus to a “holy zombie” who rose from the grave. Of course, my heart was hurt by such a comparison and, admittedly, a little anger flared in my soul. But then I thought that I probably would have joined the scoffing in my skeptical, agnostic days.

When I really ponder it, resurrection is an outlandish concept. I have never seen a corpse rise up out of its coffin during a funeral, have you? Yet we Christians continue to assert the belief that Jesus broke out of the tomb on Easter morning. Reminds me of the time I was in comparative religion class in seminary. We were studying other faith tenets, such as reincarnation, ancestor worship and polytheism. A fellow student piped up, tongue firmly planted in cheek:

“Boy, am I glad we Christians don’t have weird beliefs like those other religions,” he said. “All we do is worship a man who walked on water and changed water into wine.”

Some Christians of a liberal slant, clearly uncomfortable with the notion of a literal resurrection, assert that Jesus only spiritually rose. The disciples did not actually see the Risen Christ, but experienced His presence. I, for one, reject this understanding. The Gospel and Pauline records agree that Christ really rose and was actually seen on several occasions. They witnessed, not just “experienced.”

Still, I know all this Christian “dying and rising” talk sounds far-fetched. But consider all the weird things in reality, odd occurrences in the universe that are seen and unseen. Imagine reading a story that begins this way:

“The ugly, multi-legged creature was ready. After consuming energy for weeks, it was now prepared to become what it really was. Secreting a webby mat, it hung itself upside-down from the ceiling and slipped into a deathlike coma. Overnight, the hide of the beast slowly ripped open, revealing a pulsating, jade-green underskin that hardened like setting cement. As the days passed, the creature liquefied itself inside its protective casing, reorganizing body parts, turning its voracious maw into a slender coiled tongue. Finally, wrenching violently, the animal burst forth from its hibernation, pumping fluids into its newly-acquired wings. Seconds later, it rose into the air in search of its first meal.”

Weird, huh? But this eerie transformation happens every spring when caterpillars change into butterflies. And even if you knew what I was writing about, you have to admit that metamorphosis is an extraordinary process, one that scientists still do not fully understand. Our universe teems with anomalies and aberrations, from black holes to undersea creatures that look like they belong in a horror movie.

True. But I imagine that God, the Master Scientist, could explain the Resurrection in such terms: “You see, as Einstein proved, matter and energy are interchangeable. So, on Easter morning, all I did was translate the material body of my Son into pure energy and then back into matter again. Simple!”

So what difference does this make? Is it all just a matter of stepping back and being amazed that a dead Preacher could live again? Well, that is stupefying. But the transformation of Jesus into the Risen Lord means more than just a one-time miracle: it means an ongoing miracle to those who appropriate Easter into their minds and hearts. “Therefore, if anyone is in Christ, he is a new creature; the old things passed away; behold, new things have come.” (II Cor 5:17, NASB) Zombieism? No. God’s Easter wonder.

Someone once told me that he didn’t want to submit to the Easter truth because he wanted to keep his options open.

“If I accepted Christ, it would limit me,” he said.

“You mean you couldn’t live the way you wanted to?” I clarified.

He made a decisive gesture. “Exactly!” he crowed.

Well, he had me there. In my pre-Christian days, my self-satisfying ego whispered in my ear that if I ever opened the door to Jesus, it would be over. No more fun, no more high living. But nothing could have been further from the truth.

I actually was a zombie back then: stumbling through my days, dead inside, selfishly sucking the life out of others. But then Easter morning dawned on me. And when Christ came out of His tomb, He brought me out of mine, too.