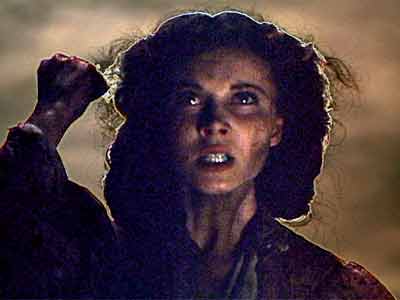 My wife and I recently joined a local Toastmasters club. I figured I could improve my preaching skills and Laura was getting more opportunities to speak through her job at Operation Christmas Child.

Last Friday, Laura gave her first talk, the “icebreaker speech” that introduces the speaker to the audience. I’m the one who has always had the “gift of gab” in the family, but after hearing Laura deliver her first talk, I think I have some competition. Not only did she receive a “Standing O” when she left the lectern, she won the Best Speaker award for the day.

Here is the text of her talk:

The title of my talk today is “Everything I know, I learned from Scarlett O’Hara.”

OK, that title stretches it a little. I didn’t learn everything from Scarlett O’Hara, but I did learn a lot.
Now, first of all, let me make sure everyone knows whom I am talking about. Scarlett O’Hara is a fictional character, albeit a “bigger than life” fictional character; otherwise known as the heroine in Gone With the Wind, the 1939 historical epic set against the backdrop of the Civil War. At the time of its release, it was the longest film ever made — almost 4 hours — and even included an intermission. Gone With the Wind won 10 Academy Awards, a record held for 20 years. It was Hollywood’s first true blockbuster.
By the time I first saw Gone With the Wind sometime in the mid-to late ‘60s, it was an almost 30-year-old movie. But it still made the rounds– regularly. I had heard my mom tell stories about growing up in small-town Texas where teenage life centered around the local movie houses. She would reminisce about how she would have to drag along her younger sister, my Aunt Janis, with her and her friends, and how they would all pack lunches to eat during the intermission. I never had a sister, or a brother, for that matter, and I certainly never ate lunch in the middle of a movie, so I was fascinated. I was thrilled when mom told me Gone With the Wind was coming to our local theater in Newport Beach, California.
Mom and I spent a lot of time together. She was divorced from her second husband and we were living in a two-bedroom apartment about a mile from the Pacific Ocean. We lived across the street from my elementary school, so I just let myself in every day after class ended while mom worked as a secretary (and that’s what they called them back then), for an insurance company. I was a pretty independent kid – had to be. My mom and dad divorced when I was 1, and by age 8, mom and my first step-father had split. My grandparents lived up the hill and I spent a lot of time with them as well. It was a different time back then. Divorce wasn’t unheard of, but it wasn’t nearly as common as today. I definitely felt a stigma having the parental divorce cloud over my head. But other than that, it was a pretty good life. Newport Beach is a beautiful place…an upscale slice of Southern California bumping right into the coastline of the Pacific Ocean. My friends and I “lived” outside – riding bikes all over town, roller-skating and creating all kinds of adventures in the beautiful landscape that was our neighborhood.
By the time we moved into the apartment complex across from our school, financially things had tightened up, but I didn’t really notice as my grandparents made sure I had everything I could need or want. Mom went out a lot. She was still a gorgeous lady in her mid-30s, down by two husbands now and searching for the third. I don’t think she ever felt confident or complete without a man in her life and I’m not sure she ever “vetted” out her choices with the care required for such an important decision.
So off we went to an evening viewing of Gone With the Wind. I was captivated with Scarlett O’Hara from the minute the movie started. Now most folks remember Scarlett as conniving, selfish, manipulative and cunning. She was definitely all that. But what I saw – and I guess I needed to see at that time in my life – was a strong, resourceful, courageous woman that did what it took to get the job done. Scarlett O’Hara became my role model. From her, I learned that the strength I needed to survive life, I had within me already. And strength was definitely something I was going to need. As the years continued, with the sudden death of my real dad, another failed marriage of my mother’s ending in an abrupt move to Texas, the culture shock of beginning junior high in the Rio Grande Valley, and my mother’s increased emotional abandonment as she looked for the next man in her life, I would continue to catch the return engagements of Gone With the Wind, now seeing it in the same small movie theater where my mom enjoyed it as a young girl herself. On some level, Scarlett fortified me to continue on, fight the good fight, and know there will always be another, better day.
Now while I give a lot of credit to Scarlett for molding me in those younger years, luckily, as I got older, I came to know an even more influential person in my life — Jesus Christ. How comforting to know that He is my rock and my comfort and provides the strength I need to get through life. No longer do I need to solely rely on my own internal strength.
At the end of Gone With Wind, Scarlett finds herself alone, struggling with the regrets of her life. Unlike Scarlett, I can look back and see that my life is very good with great satisfaction in the journey. There was a degree from TCU, a marriage to a really great guy, a journalism and marketing communications career in my 20s and 30s, three unique and wonderful kids…no regrets for me!
Last weekend, my husband and I watched Gone With the Wind at home. It had been years, perhaps two or three decades, since I had seen this film. Watching it was cathartic for me. I still LOVE this movie, with its sweeping cinematography, beautiful fashions and tragic love story…but I don’t need it anymore.
I have something so much better now.