The Academy Awards show last night prompted me to remember my first Toastmasters talk that I delivered a few weeks ago. I was excited to receive Best Speaker of the Day with “My Life As a Movie.” With my wife winning last Friday (see post below), I guess we will need to make room on our mantel for our Oscars….oh, wait…I got us confused with “Brangelina.” They get statues, we get ribbons.

“My Life As a Movie” 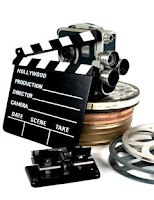 I love movies. I can’t afford to go to them anymore, so that’s why you’ll see me at Redbox more than the theater. I love all kinds of movies, too, except maybe those foreign ones with subtitles. If it has a semblance of plot and acting above the level of a grade school pageant, I can sit through just about anything.
Growing up in Oklahoma City, my life was like the movie “Sandlot.” My friends and I were always trying to scare up an impromptu baseball game in a backyard or vacant field. I loved baseball. I collected baseball cards and idolized Mickey Mantle, who was also an Okie.
At home, my mother was June Cleaver but my dad was the “Great Santini.” Robert Duvall, one of my favorite actors, played a hardnosed Marine aviator in this film, who couldn’t bring himself to show love and affection to his son. Like the Great Santini, my dad was a military pilot who had a hair-trigger temper and who was never satisfied with anything that I did, no matter how hard I tried.
My junior and senior high years could be titled “Road Warrior.” We moved six times in six years, from Oklahoma City to Ft Worth to Joshua, TX to Ft Worth to Tulsa, OK.  When I graduated from high school, I made “The Great Escape” to college and my life became a National Lampoon movie. I majored in beer.
I got married in 1982 to Laura and the first year of our marriage could be titled “Crash.” We were broke, I was still drinking, we fought a lot, I couldn’t find the handle on my life. Finally, one day, Laura said that we should go to church. She thought we could meet some friends and receive some inspiration for our lives. I told her no, and that’s then I painfully discovered a cardinal rule of a good marriage: “Happy wife, happy life.”
We went to church. It started scratching an itch. We joined a Sunday school class and volunteered in the youth group. One morning in worship, I experienced “Glory.” God touched my broken heart and life has never been the same again.
In 1984, I ended up in seminary with a call to preach. A year later, Laura and I entered “Parenthood” with the birth of our first son. Over the next nine years, we had two more kids and decided to stop so our house wouldn’t look like “Cheaper By the Dozen.”
Life was good, but not perfect. I wanted my relationship with my dad to heal, but it looked like “Mission: Impossible.”  On October 7, 1994, after a powerful prayer meeting, I had an urge to call my father and wave an olive branch. He took it and we reconciled. Three hours later, he died of a heart attack in his living room. I have never quite experienced a day when joy and sadness were mixed in equal measure.
Life went on. In 1999, I took a bold step and left pastoring to form my own ministry called One Man Show. I travel, preach revivals and perform dramatic monologues. I have also done mission work in Mexico and have an alter ego named “The Almost Amazing Marko,” who does “magic with a message” at churches and schools.
You can see that my life has been, at various times, a disaster movie, a comedy, a family drama and sometimes a musical because I like to sing in the shower. This year it will be a romance, as my wife and I celebrate our 30th wedding anniversary.
Three years ago, we moved to a new house. In addition to two bipedal children living at home, we also have four furry kids, all rescue dogs. You can truly call our place “Animal House.”
Oh, for the first time in my life I have a big screen TV… so now we can watch movies in style.
“It’s A Wonderful Life,” after all.